Looking for a Home, a Place to call our Own, a Place where we can be Alone is an exhibition of paintings Hickey has produced as a part of his practice-based PhD research at Ulster University, Belfast. The exhibition explores queer Irish identity and masculinity through the exploration of the nude male figure in a fantasy version of the Irish landscape.

“Queer people have often been relegated to the margins and their histories have been erased. Even up until recently, our rights have been denied on the island of Ireland. As a part of my research and for this exhibition, I wanted to bring forth the hidden figures, by creating a world where they can explore and exist without the limitations of Irish or Northern Irish cultural assumptions being placed upon them.”

Hickey imagines this world as taking the form of a mysterious island of refuge for the characters to inhabit, hidden and free from intolerant and bigoted rhetoric. He is inspired by Irish mythology, specifically the mythological island of Brasil (or Hy-Brasil), which was said to be off the west coast of Ireland. The island has been featured in myths and legends as far back as the 14th century and was often a site of expeditions in search of it. The island in Hickey’s paintings is directly inspired by the Irish landscape which he creates by taking photographs of the west of Ireland and of sites in and around West Belfast, where he lives, and using them to invent a fictionalised version of Ireland to paint and draw from. By exploring these queer male figures openly, Hickey hopes to disrupt the heteronormative binary by bringing forth the invisible and the marginalised. 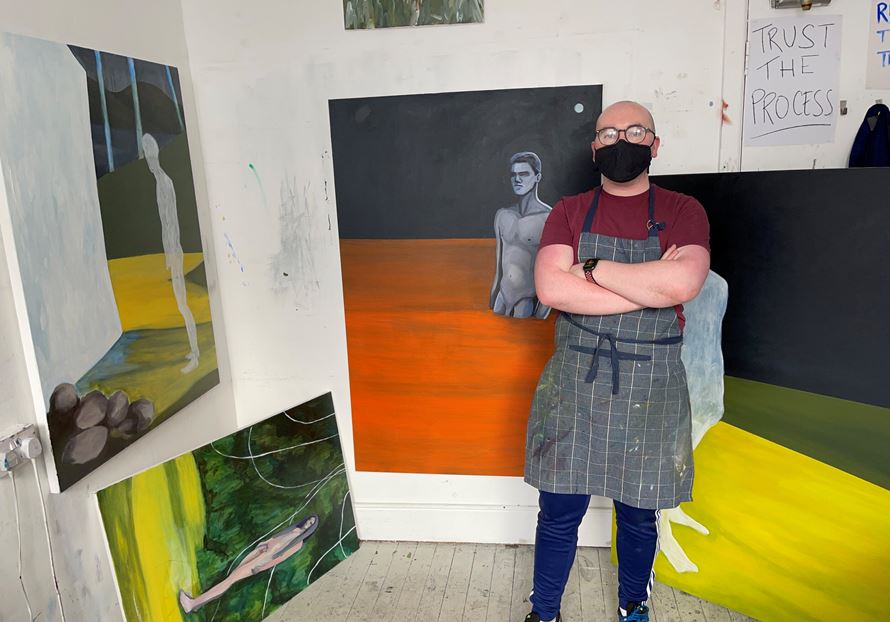